Cross-border trade is part of the everyday rhythm of business for many companies in the Buffalo Niagara region and Southern Ontario.

John Darby, president of Niagara Transformer Corp. in Cheektowaga, has experienced that firsthand. His family-owned manufacturing company sold its first transformer to a Canadian customer in 1947; today, Canada accounts for 30 percent of its export sales.

“Exporting to Canada has been something that is very, very important to our business model for 71 years,” Darby said.

The relationship is so important to Darby that on Friday he hosted Karina Gould, a member of the Canadian prime minister’s cabinet, for a plant tour during Gould’s three-day visit to the Buffalo Niagara region this week.

The North American Free Trade Agreement was high on their agenda after the Trump administration served notice this week it is preparing to renegotiate the deal.

Gould, who is also a member of Parliament representing Burlington, Ont., was eager to talk about the U.S.-Canada connection. She also met this week with local politicians and labor leaders, spoke at a World Trade Center Buffalo Niagara event, and visited places like Ford Motor Co.’s stamping plant in Woodlawn. 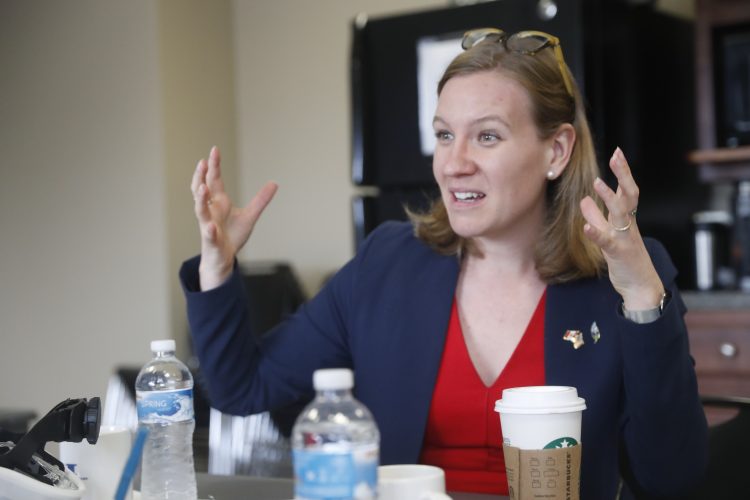 “There are jobs in Western New York because there is industry in Canada,” said Karina Gould, a member of Canadian Prime Minister Trudeau’s Cabinet, during a visit Friday to Niagara Transformer in Cheektowaga. (John Hickey/Buffalo News)

“It’s demonstrating the importance of the relationship between Canada and the U.S., but particularly between Southern Ontario and Western New York,” Gould said. “Buffalo is a really important region for us.”

On the campaign trail, then-candidate Donald Trump threatened to terminate NAFTA, denouncing it as a “disaster.” But since taking office, Trump has instead talked about reworking and updating the deal. Negotiations will begin no sooner than mid-August.

NAFTA, the pact between the U.S., Canada and Mexico that took effect in 1994, has its defenders and critics. The free trade debate reignited last year, with the prospect of the U.S. joining the Trans-Pacific Partnership. The AFL-CIO’s president, Richard Trumka, slammed the TPP as a job-killing “giveaway” to corporations that also hurt working people in the United States and other countries. The deal failed to win support from Congress, and Trump withdrew the U.S. from the TPP with the stroke of a pen.

Now, NAFTA is again under scrutiny. “Since the signing of NAFTA, we have seen our manufacturing industry decimated, factories shuttered, and countless workers left jobless,” Commerce Secretary Wilbur Ross said in a statement this week. “President Trump is going to change that.”

Niagara Transformer designs and makes transformers for utility and industrial customers around the world. The 100-employee company also buys products from Canada, such as steel from Cogent Power, a supplier in Ontario.

“From our point of view, we’ve grown our export market exponentially because of NAFTA,” Darby said. “So it really, really works.”

Cogent has supplied parts to Niagara Transformer for about 30 years, but the two companies have developed more of a partnership in the past several years, said Ron Harper, Cogent’s president. Cogent provided advice on the layout of a Niagara Transformer manufacturing plant. And Niagara Transformer doesn’t have to stockpile expensive steel inventory, because Cogent replenishes its shelves quickly.

“Like (Darby), I think the NAFTA agreement has been very helpful for us,” Harper said. “It helps him expand his business and have access to materials. If he can only buy from the U.S., he’d have a very different value proposition on the supply side.”

Gould is familiar with the two countries’ ties, since she lives only an hour from the border, but said it’s a message that needs to be spread more widely among policymakers.

“There are jobs in Western New York because there is industry in Canada,” she said. For instance, the Ford stamping plant sends truckloads of stamped parts to a vehicle assembly plant up the QEW in Oakville, Ont., a source of work that supports jobs at the Woodlawn site.

“Our government is, of course, open to improving NAFTA,” Gould said. “It’s been updated 11 times since it came into force in 1994. But it’s been beneficial and it’s something that both of us have benefited from.” Gould, 29, is the youngest woman ever named to a Canadian prime minister’s cabinet, serving as the Minister of Democratic Institutions.

Gould said there are about 4,000 jobs in the Buffalo area directly related to trade with Canada, and 50,000 across Western New York. And about 200 Canadian companies have invested in Buffalo. But she said the relationship goes beyond those numbers, with companies supplying components to a business partner on the other side of the border.

“We don’t just buy and sell from each other, we actually make things together,” Gould said.

John Manzella, World Trade Center Buffalo Niagara’s president, said the economy has changed a lot since NAFTA took effect more than two decades ago, and says NAFTA could use an update.

In the early 1990s, service exports were not as robust as they are now, he said. “We’ve got a very strong and growing e-commerce industry, with digital technology.”

NAFTA could also benefit from updated intellectual property rights and protection, as well improving the harmonization of standards and regulations between the member countries, he said.

“Those three areas could certainly use some improving,” he said. “Now if the administration takes a hostile position and demands certain concessions that might throw the agreement off balance, then that can be a problem. We’re hoping the president moderates his position, and I think he has to some degree.”

“If it comes down to improving the NAFTA agreement and updating it, well that’s great,” Manzella said. “If they use the opportunity to bully the Canadians or the Mexicans, which leads to a relationship that deteriorates, well then that’s a bad thing.”

If companies feel uncertain about trade policy, they often are reluctant to invest, he said. “When you don’t know what risks are ahead, you tend to be very conservative and take a wait-and-see attitude. That’s what many companies have done with the current administration, in terms of trade policy. You just don’t know what’s next.”

Companies that export will watch closely to see what happens to NAFTA, Gould said. “Any thickening of the border is going to make it hard for companies on both sides of the border. So that’s a really important message to get across and remember.”

Darby, Niagara Transformer’s president, doesn’t want to see cross-border trade hindered. “I don’t know where NAFTA’s going to go,” he said. “It’s not perfect, but in my space, it works. It’s probably better than whatever the alternative is that they’re going to put in place, which we haven’t tried out. So that’s a worry for us, obviously.”

Buffalo Niagara Partnership: Cross-border agreement says ‘We are one economy’