The late Venezuelan leader Hugo Chavez and his allies triumphed nearly every time voters went to the ballot box. But Chavez’s successor, President Nicolas Maduro, appears to have lost interest in testing the will of the people.

Amid a severe economic crisis, opinion polls show that support for Maduro and for ruling United Socialist Party (PSUV) politicians is collapsing. In response, electoral authorities — whom analysts claim take orders from the executive branch — have over the past year shelved or delayed elections large and small.

In October, the Maduro government abruptly cancelled a recall referendum that could have removed the president from office. Gubernatorial elections scheduled for December have been postponed. Even voting for the leadership of many labour unions, professional organizations, public university governments and neighbourhood councils has been suspended.

For Chavismo, the leftist political movement founded by Chavez and which has ruled Venezuela for the past 18 years, “elections used to be sacred when they knew they could easily win them,” said Eugenio Martínez, a Caracas journalist who specializes in electoral issues. “But as soon as elections became uncomfortable, they have tried to avoid them or to change the rules.”

Venezuelan officials contend that elections are simply not a priority right now because they are dealing with more pressing matters, such as food shortages and triple-digit inflation they describe as part of an “economic war” being waged against them by the opposition.

In a January speech, Diosdado Cabello, a congressman and a key power broker within the ruling PSUV, bluntly stated: “We are not going to have elections…. What we are going to have here is revolution, and more revolution.” 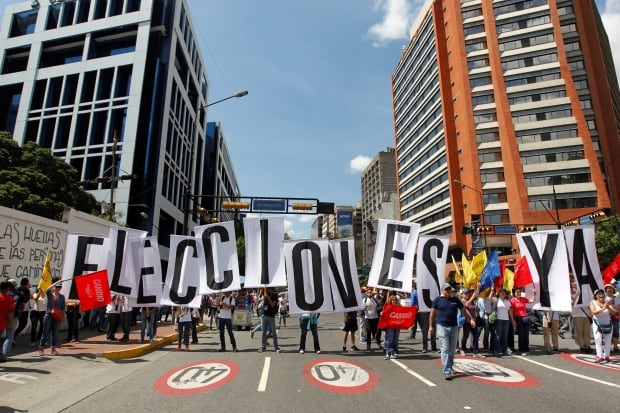 Opposition supporters hold placards that read ‘Elections now’ during a rally against Maduro’s government, in Caracas, on January 23, 2017. (Christian Veron/Reuters)

‘There is a dictatorship’

Critics call these moves troubling signs for democracy in Venezuela and wonder whether the 2018 presidential election will be free and fair — or whether it will be held at all.

Last week, Luis Almagro, who heads the Organization of American States, said that Venezuela must hold general elections immediately, and if it doesn’t, member states — including Canada — should suspend Venezuela from the Washington-based regional body.

According to Almagro, phobia of elections is just the latest sign of Maduro’s turn toward authoritarianism. His government holds more than 100 political prisoners and has cracked down on the media. It controls nearly all branches of power. Although the opposition holds a majority of seats in congress, the executive branch has neutered that body by using the judicial system to nullify new legislation.

In a column published Tuesday in the Bogota, Colombia, newspaper El Tiempo, Almagro declared: “Today… there is a dictatorship” in Venezuela.

The electoral impasse has left opposition leaders in limbo.

‘The government is terrified of measuring its popularity through a popular vote.’
– Jose Graterol

Jose Graterol, a lawyer who is trying to run for governor of western Falcon state, has spent the past year visiting towns and villages, shaking hands and giving speeches about his vision of the future. But now, he says, it’s unclear whether there will even be a vote. Sitting governors have so far ruled an three extra months beyond their normal four-year terms, and electoral authorities have yet to set a date for new elections.

“This shows that the government is terrified of measuring its popularity through a popular vote,” Graterol said.

The PSUV currently controls 20 of 23 state houses. But polls indicate that if elections were held now, the opposition could win about 16 governorships, marking a huge shift in power. In the last nationwide elections, held in December 2015, the government suffered a humiliating defeat, with opposition candidates winning 112 of 167 congressional seats. And since then, both the economy and support for the government have eroded further.

“The government controls nearly all levers of power while the opposition has the support of the voters,” said Phil Gunson, a Caracas analyst for the International Crisis Group. “That’s why the opposition needs to have elections and why the government doesn’t.”

Besides delays, the Maduro government is trying to weed out the competition in case of future elections, said Martínez, the journalist. For example, the National Electoral Council declared that all political parties must gather thousands of member signatures in order to maintain their legal status, but each party gets just two days to carry out this process. 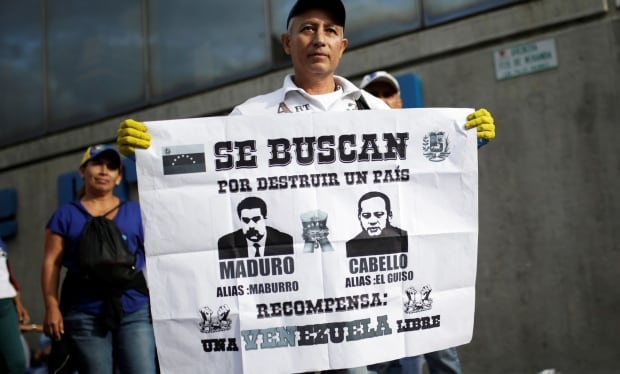 An opposition supporter holds a placard that reads ‘Wanted for destroying a country. Reward: A free Venezuela,’ with images depicting Maduro, left, and Diosdado Cabello, of Venezuela’s United Socialist Party (PSUV), during a rally in Caracas, September 1, 2016. (Marco Bello/Reuters)

In recent elections, opposition parties fielded candidates through a coalition known as the Democratic Unity Roundtable. But now the Supreme Court is hearing a lawsuit brought by a ruling party politician alleging that the coalition committed fraud. A guilty verdict would effectively outlaw the opposition coalition.

All of this manoeuvring has many Venezuelans wondering whether the government intends to comply with the constitution by holding presidential elections by December 2018. Gunson said that cancelling the vote would be a major step toward pariah status, as the Maduro government would be widely be considered a de facto regime propped up only by the military.

However, Martínez said many high-ranking government officials have been accused of drug trafficking, human rights abuses and corruption, and they fear prison or extradition to the United States should the opposition win the presidency.

He predicted: “If Chavismo doesn’t think it has a way to win the elections, it will not hold elections.”