Donald Trump is a president who vows to build walls — “Walls work, ask Israel,” he has said. But he’ll have to straddle them to make any headway towards what he’s called “the ultimate deal” in the Israeli-Palestinian conflict.

The president’s Israeli policy is difficult to pinpoint. He promised to move the U.S. Embassy from Tel Aviv to Jerusalem, but hasn’t. He will visit Jerusalem’s holy site the Western Wall, considered contested territory internationally, but without Israeli escorts in his upcoming trip. 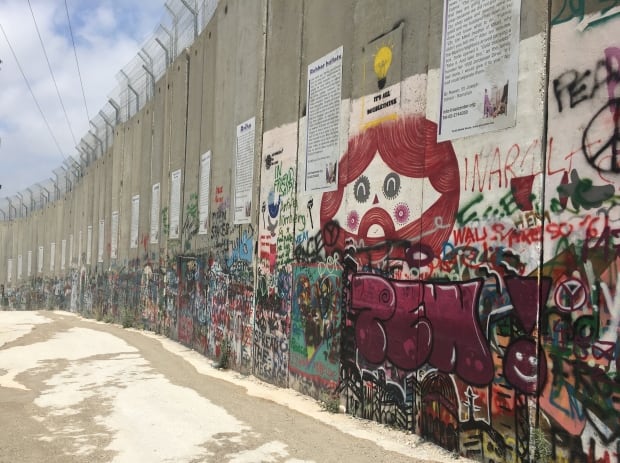 Donald Trump will travel to the other side of the separation wall into Bethlehem on Tuesday. He’ll visit the Church of the Nativity and meet with President Mahmoud Abbas. (Susan Ormiston CBC )

And while Jewish settlers thought he would support more building and expansion in the settlements, the president suggested Israeli Prime Minister Benjamin Netanyahu hold off issuing permits for now.

All of which means there are mixed reactions to the prospect of a Trump visit within Israel and the Palestinian territories.

No love for the wall among Palestinians

On a whirlwind 26-hour trip to Israel and the West Bank beginning Monday, Trump will go to Bethlehem, which is separated from Jerusalem by a wall and checkpoints.

Palestinian artist Fares Eslini has no time for Trump’s fascination with walls. 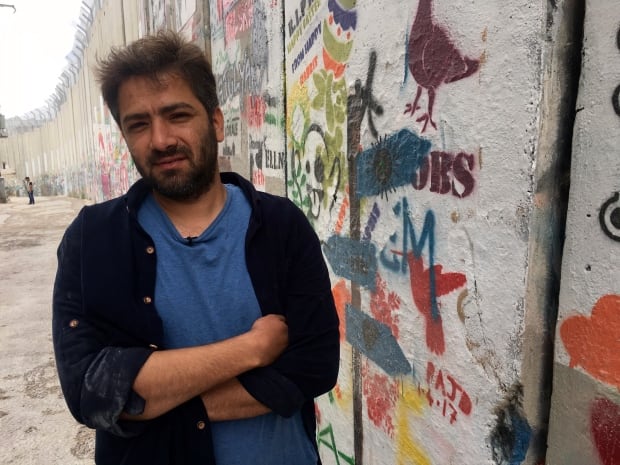 Palestinian artist Fares Eslini stands beside the wall separating Bethlehem from Jerusalem. He says the separation walls make the West Bank like a ‘jail,’ and President Trump’s fascination with walls is of no interest to him. (Susan Ormiston CBC)

“For sure, they don’t work. No,” he says standing next to part of the Bethlehem wall covered in street art.

“Look around you, it’s like a jail. It’s like a big stone on your chest, you can’t breathe.”

The separation barriers were constructed by Israel 14 years ago to stop attacks by Palestinian suicide bombers. They’ve become permanent demarcation lines and a source of deep tensions. President Trump is mocked on wall separating Bethlehem from Jerusalem. The street art covering the wall is a protest to the separation barriers constructed along much of the West Bank. (CBC )

Eslini has stenciled a giant Mohammad Ali on part of the wall, glove raised standing atop a watch tower. “Fighting back,” he says.

Trump goes to Bethlehem Tuesday on the second day of his visit to meet with Palestinian Authority President Mahmoud Abbas. That follows a working meeting and dinner with Netanyahu on Monday. Both leaders have been to the White House in advance of this trip.

“I think it’s time to challenge the Israeli government to see if they are really authentic and serious in the peace aspirations like the Palestinians,” says Dr. Jad Isaac, director general of the Applied Research Institute-Jerusalem. 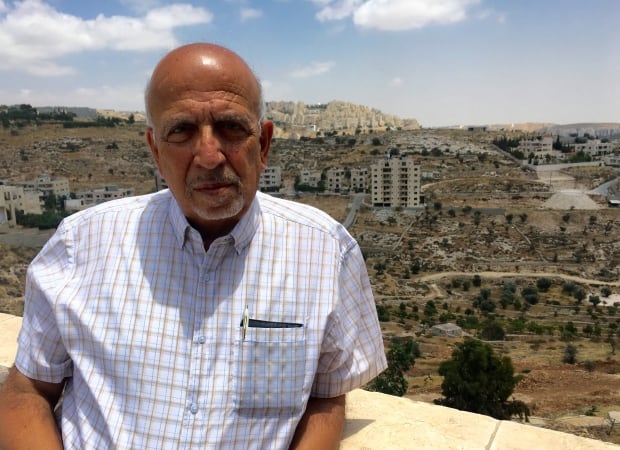 Dr. Jad Isaac, director general of the Applied Research Institute-Jerusalem, is doubtful about Trump’s promise of peace. ‘He promised peace would be achieved. I’m not confident, but we will give him the benefit of the doubt.’ (Susan Ormiston CBC)

“I think there is a better chance now with him [Trump], This man is a businessman, not worried about Congress and what they will do to him.”

But no one can ignore the domestic pressures on Trump which may affect how bold he can be in Israel.

American officials are downplaying any expectations for a three-way meeting with Trump, Netanyahu, and Abbas as “too early.” 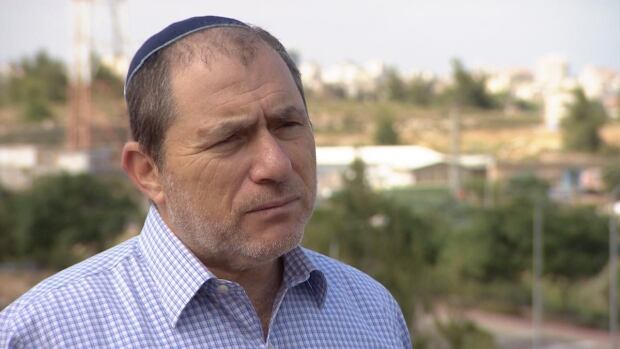 Chaim Silberstein, president of Keep Jerusalem, wants President Trump to support Jewish settlements and not propose any freeze on building in the West Bank and East Jerusalem. (Jared Thomas CBC )

The issue of Israeli settlements is just one of the many barriers to clear.

“Just over those hills we’re waiting to build 300 units,” says Chaim Silberstein, gesturing to the hills of Beit El, a Jewish settlement outside Jerusalem.

“We have young families waiting to move in, but those units are being held up. Prime Minister Netanyahu froze those because he’s waiting for President Trump.”

“The Arab pressure has born some fruit,” he says, “Trump is more cautious.”

But as he walks down a hillside, he points to a four-storey dorm and school, built years ago and financed by American David Friedman. Friedman is the new U.S. Ambassador to Israel, formerly one of Trump’s lawyers.

“For the first time Jews living in the Biblical heartland have an advocate for their cause in the American administration, and that is very comforting,” he says.

The Israeli government is intent on strengthening the Israeli-U.S. alliance, tarnished during the Obama administration. But this visit is fraught with unpredictability and arrangements characterized as haphazard, and last minute, according to some Israeli officials. Israeli media reported Sunday an angry Prime Minister Netanyahu had to order some of this ministers to attend Trump’s reception after they were told they wouldn’t be included in the reception line welcoming Trump.

“It’s easy to be cynical and appropriately skeptical,” says David Horovitz, editor of the Times of Israel.

“But this is the first time a president has come to Israel, only months into his term and the first [sitting] president to go to the Western Wall, who is also going to Bethlehem.”

“So what can be politely described as a tumultuous presidency on the Israeli-Palestinian side has actually been quite interesting,” says Horovitz.

But back in Bethlehem – staring up the wall, Fares Eslini says he won’t be watching Trump’s arrival at the Church of the Nativity in Bethlehem. “For sure no, why go see him? To make another wall?”