Canadian territories and provinces are expected to sign a free trade deal in April that will change the way goods and services are exchanged across the country.

“It’s the biggest step forward in removing barriers to internal trade in our country in the history of Canada,” Manitoba Premier Brian Pallister said Thursday.

The Canadian Free Trade Agreement was largely negotiated during a first ministers meeting in Whitehorse in July.

“It will be the most ambitious free trade agreement this country has ever had,” he said in an interview with Power and Politics host Rosemary Barton. “It’s going to create more jobs for all Canadians, in Ontario and right across the country.”

New Brunswick Premier Brian Gallant said the deal is “very close” to being made and all provinces want to see it signed.

“Any time that we can reduce trade barriers within Canada and around the world that is good for the New Brunswick economy, so we are very keen on this,” Gallant said.

That provinces had achieved the deal was supposed to be a “surprise,” Pallister said, but ended up being made public in an order in council dated March 22 giving Manitoba’s premier and trade minister approval to sign on to the accord.

The new trade deal is set to replace the Agreement on Internal Trade which came into effect in 1995.

The biggest change, from Pallister’s point of view, is the new agreement’s negative list approach.

The existing Agreement on Internal Trade requires provinces and territories to list all the goods and services which they allow to be traded.

Under the new trade deal, provinces will only list items they want excluded from the deal — giving governments the ability to protect vulnerable areas of their economy or underdeveloped regions such as northern communities while setting open trade as the default position.

“That’s a massive change,” said Pallister of the new negative list approach. “It will fundamentally change the way we do trade.”

Premiers used the New West Partnership Trade Agreement, a trade accord that harmonizes regulations and enables labour mobility between Manitoba, British Columbia, Alberta and Saskatchewan, as a template for the Canadian Free Trade Agreement, Pallister said.

Barriers get in the way, premier says

The Canadian Free Trade Agreement is set to impact virtually everything from people’s ability to work in different provinces, to how small businesses bid on job opportunities, to the liberalization of cross-border beer and wine sales.

For example, an architecture firm in Winnipeg will be able to bid on a project outside the province under the agreement, tapping into growing markets in other parts of the country, said Pallister.

A new online portal will give small businesses the ability to see requests for proposals from across Canada and bid on jobs from coast to coast to coast.

The accord also sets up a mechanism for resolving trade disputes between provinces and makes it easier for workers to take jobs in other provinces, said Pallister.

Loren Remillard, president and CEO of the Winnipeg Chamber of Commerce, said a “patchwork” system of regulations across Canada means that many skilled labourers have trouble leaving the jurisdiction where they are first certified.

“If you’re a licensed hairdresser in Manitoba you just can’t pick up and move to Saskatchewan and set up shop. There are so many different rules,” he said.

As with all trade deals, there will be areas of the economy that benefit and others that take a hit, but overall this is good for Canada, Remillard said.

“This is critically important to our national economy.”

The trade agreement will also set a course to allow the trade of beer, wine and spirit between provinces. 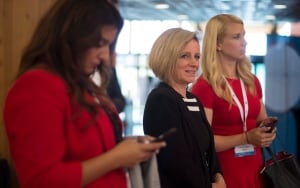 Details about how the agreement impacts different economic sectors will be released in April when the trade agreement is announced.

One of the Senate’s recommendations was to establish a negative list approach to trade, as outlined in the upcoming agreement.

Some of Canada’s international trade agreements make it easier for companies to do business in foreign countries than in provinces just a few hundred kilometres away, the report found.

Steve Verheul, Canada’s chief negotiator on Canada-Europe trade deal, said while he was not part of the Canadian Free Trade Agreement talks, he believes the accord makes the playing field more even.

“I have been told that [CFTA] did successfully remove most of those inequities but we’d have to verify that from someone who was actually involved in those negotiations,” said Verheul.