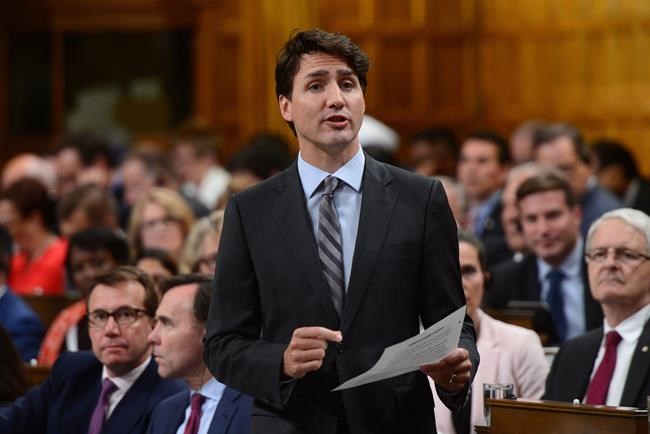 OTTAWA — Justin Trudeau reminded senators Friday that they’re unelected and have no business rewriting a federal budget passed by the elected House of Commons.

But he drew a line at the government’s budget implementation bill, as senators debate whether to hive off the portion of it that deals with creation of a new infrastructure bank.

“It’s important to understand that the House of Commons has the authority when it comes to budgetary matters,” Trudeau said during a news conference with Belgian Prime Minister Charles Michel.

“I very much respect and encourage … the important role the Senate has in deliberating on pieces of legislation that pass through the House, on making recommendations and improvements in many cases … I think it’s an enhancement to our democratic institutions and to the governance of our country,” he stressed.

That said, Trudeau added that the government is “looking for swift passage of the federal budget that passed through the House of Commons, with all the legitimacy that the elected House of Commons has.”

That same fact prompted Senate Speaker George Furey to disallow a motion Thursday from independent Sen. Andre Pratte to carve the infrastructure bank provisions out of the budget bill so they could be more closely examined. In effect, Furey said the motion would amount to the Senate initiating two money bills.

However, senators voted 38-33 to overrule Furey. A vote on Pratte’s motion to split the bill will now take place next week, possibly as early as Monday.

The Commons would have to concur with a Senate bid to divide the bill or otherwise amend it, which Trudeau made clear is not in the cards.

Should his attempt to split the bill be rejected by the Commons, Pratte told CBC’s “Power and Politics” on Friday that he would defer to the will of the elected chamber.

The Senate could also theoretically vote to defeat the bill outright but Pratte noted that it has not rejected any legislation put forward by the Trudeau government thus far.

“We’re very much aware that we’re not elected,” he said.

Some have blamed the potential for an impasse over the budget bill on Trudeau’s insistence on appointing independent, non-partisan senators.

“Justin Trudeau’s Senate reforms have given senators a green light to do exactly this,” said NDP democratic reform critic Nathan Cullen. “His chickens are coming home to roost.”

However, the decision to overrule Furey was not actually due to independent senators. It was primarily the result of Conservative senators —  who still make up the single largest group in the chamber and who continue to operate as a partisan group — voting en masse to overturn the ruling.

In any event, long before Trudeau began appointing independent senators, the upper house had a history of occasionally balking at rubber-stamping a money bill.

For instance, in 1990 the then Liberal-dominated Senate was poised to defeat a Conservative government bill creating the goods and services tax. Brian Mulroney, prime minister at the time, resorted to an obscure constitutional clause to appoint an additional eight senators, who ensured passage of the bill.

In 1993, a Mulroney government budget implementation bill was defeated in the Senate, even though the Conservatives commanded a majority in the chamber at the time.

The current budget bill includes creation of a $35-billion infrastructure bank, with which the Trudeau government hopes to leverage up to $5 in private investment for every $1 in government funding to finance transformational infrastructure projects.

Trudeau and Finance Minister Bill Morneau maintain the bank is an integral part of the government’s plan to bolster the middle class, spur economic growth and create jobs.

However, some senators fear the bank’s proposed structure leaves it open to political interference and that taxpayers will wind up on the hook for projects that run over-budget or flop.

Some senators also object to another provision in the budget, which would allow the federal government to automatically hike the excise tax on beer, wine and spirits by the rate of inflation every year.