HOUSTON – Boosting confidence in both the energy industry and the environmental regulators that oversee it will help attract investment in Canadian natural resources over the long run, Prime Minister Justin Trudeau said Friday as he wrapped up two days in the U.S. energy heartland.

“The one thing I have heard consistently from leaders in the energy industry is the need for clarity,” Trudeau said Friday in Houston, Texas, where he attended an influential gathering of politicians and energy executives.

Trudeau was at the CERAWeek conference to deliver a keynote address – a first for a Canadian prime minister – to pitch investment in the Canadian oilsands and other energy sectors while also making the case that natural resource development needs to be done alongside steps to protect the planet.

On Friday, he made it clear that his Liberal government believes the thoughtful development of both renewable and traditional energy sources, coupled with suitable environmental oversight, is the road to economic prosperity. 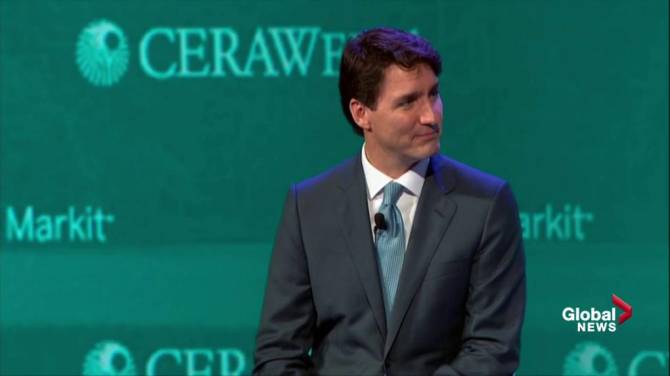 Once that happens, “we are going to see many people invested and interested in partnering in drawing on Canadians’ great natural resources,” he said.

Those steps in Canada include a carbon-pricing plan aimed at reducing greenhouse gas emissions, which means the Liberal government is heading in one direction while U.S. President Donald Trump is going another – moving away from environmental regulations and promising to boost fossil fuel production.

Critics of the plan, including the Conservatives, argue it would put Canada at a competitive disadvantage, especially as lower crude prices and the quick growth of shale oil prompts international energy giants to reconsider their investments in the Alberta oilsands, which are costly and carbon-intensive to produce. 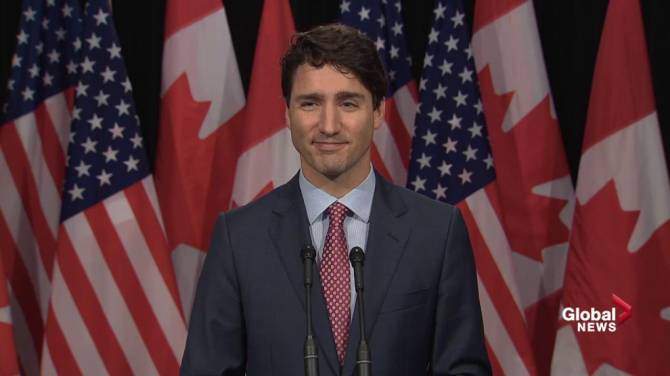 On Thursday, Netherlands-based Royal Dutch Shell and Houston-based Marathon Oil announced plans to sell their stakes to Canadian Natural Resources for $12.74 billion in cash and shares.

Trudeau is showing no signs of changing course, however, and he argues the future benefits will outlast any growing pains as Canada transitions to a low-carbon economy.

“I know that complementarity, or different approaches, on both sides of the border will suit some, suit others, and businesses will make the decisions they make,” he said.

“I’m always proud of  … the responsible, thoughtful, long-term approach that Canada is taking to reducing regulations by increasing public confidence in regulators and indeed in industry.”

The trip to Houston also included some face time with business leaders from the energy industry.

Trudeau, along with Natural Resources Minister Jim Carr and David MacNaughton, the Canadian ambassador to the U.S., held a roundtable with energy industry executives Friday morning, including from Enbridge, TransCanada and Kinder Morgan – three companies behind major pipeline projects.

Trudeau also met Greg Abbott, the governor of Texas, and Lisa Murkowski, the U.S. senator for Alaska. Both are Republicans.