A Canadian woman travelling on a Canadian passport says she was turned away at the U.S. border and told she needed a valid immigrant visa to enter the country.

Manpreet Kooner, 30, is a Canadian citizen who was born to Indian parents in Canada and raised here. She now lives in Montreal’s LaSalle borough.

She told CBC she was on her way from Montreal to a spa in Vermont for a day trip with two friends Sunday afternoon, but she never made it.

Kooner said she was held at the border for six hours before being turned away.

At one point, she said, a border agent told her: “‘I know you may feel like you’ve been Trumped,'” an apparent reference to U.S. President Donald Trump.

Trump’s January executive order barring citizens from seven majority-Muslim countries from entering the country was later blocked in U.S. courts, but has touched off legal battles and confusion around the world.

She said the border agents singled her out and didn’t ask to speak to her friends.

“I feel targeted. I’m set aside from everyone else, and I feel helpless because I keep asking, ‘What do I need to do?'”

U.S. Customs and Border Protection and the U.S. Embassy could not immediately be reached for comment.

Kooner’s story is the latest in a string of recent tales involving Canadian travellers scrutinized or turned away by U.S. border agents.

Last month, for instance, a woman from the Montreal suburb of Brossard said she was denied entry after being fingerprinted, photographed and questioned in detail about her religion and her views on Trump.

Told she needed an immigrant visa

Kooner said she first had trouble getting into the U.S. last December. She was with friends and her then fiancé when her car was pulled over for what she was told was a random check, she said.

She was made to fill out a number of forms, but was eventually told there was a problem with the computer system and should return the next morning.

When they went back, she was let through without any problems.

The form explaining why Kooner was denied entry to the U.S. says she was turned away because she is an immigrant who did not have a valid immigrant visa. (Submitted by Manpreet Kooner)

She said that when she tried to cross Sunday, at Highgate Springs, Vt., an agent checked her passport and said they needed to ask her additional questions.

The agent mentioned that she had been stopped in December and asked why she was trying to go through again, Kooner said.

She said she told them she’s a Canadian citizen, has no criminal record and, before December, never had any issues crossing the border.

She also said she was fingerprinted and photographed, and signed a form to withdraw her application for entry to the United States.

Though she was told there are no flags on her file, a border agent advised her not to fly to the U.S. without a visa, Kooner said.

The reference to Trump came as the agent was explaining the reasons why she was refused entry, she said. 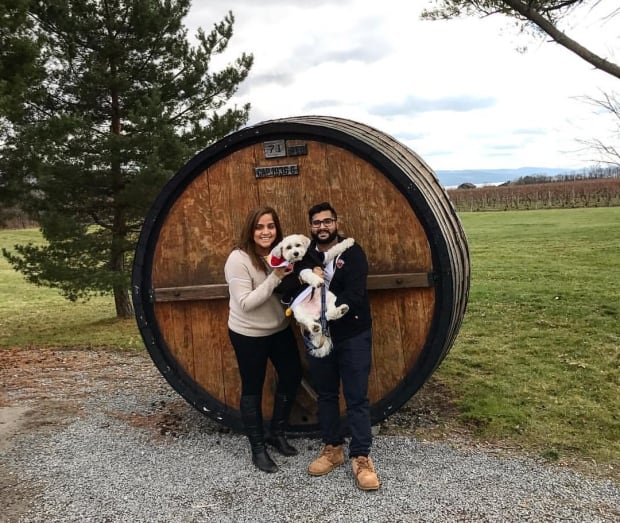 In December, Kooner and her fiancé took a trip to upstate New York to visit a winery. On their way there, she says, she was questioned at the border, but was later allowed to cross without issue. (Submitted by Manpreet Kooner)

The border agent couldn’t say what kind of visa she would need, only that she would have to visit the U.S. Embassy in Ottawa to get one.

Kooner said that’s when she started to cry.

On the U.S. Department of State’s Bureau of Consular Affairs website, an immigrant visa is described as the first step to becoming a lawful U.S. resident, and a requirement for foreign citizens who want to live permanently in the United States.

A spokesperson for that department told CBC News the common category of visa that is used for short term, non-immigrant travel to the United States – including tourism and business – is the B1/B2 visa type.

However, the website says travellers from Canada and Bermuda generally do not need visas for tourism and visits.

According to U.S. Customs and Border Protection, an average of 1.2 million people a day try to enter the U.S. at all crossings. Of those, an average of between 300 and 500 are denied entry for various reasons.

Kooner, who is now in Ottawa and will visit the embassy Monday morning, says she has contacted lawyers to see what to do next.

She spent more than $1,000 on tickets to attend a musical festival in Miami at the end of the month, and planned to return to that city in May for her bachelorette party.

Kooner is now thinking about selling those tickets and cancelling the party. She said the thought of having to cross the border now makes her feel sick.