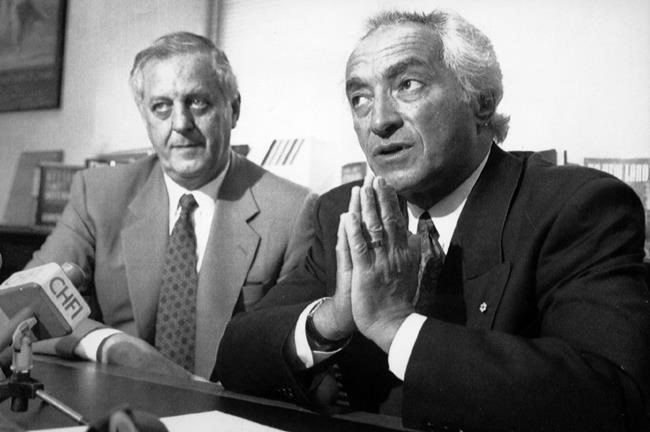 TORONTO — An icon of the Canadian publishing industry who’s been credited as a driving force behind the establishment of a Canadian literary canon has died. Avie Bennett was 89.

Bennett was the former chairman of publishing house McClelland & Stewart Ltd, a co-founder of Historica Canada, and the former chancellor of York University, as well as a noted philanthropist.

Bennett started working in the commercial real estate business in the 1950s. His biography on the “Alumni of Influence” section of the University of Toronto website notes that he was responsible for opening some of Canada’s first strip malls. In 1985, he purchased McClelland & Stewart.

“When he got into book publishing, he certainly did not do it thinking, “Here is where I’m going to enhance my fortune,'” said Anthony Wilson-Smith, president of Historica Canada and a friend of Bennett’s for over 20 years. “He got into it because he felt that Canadian literature mattered, Canadian culture mattered, and he was in a position to do something about it.”

Bennett forged relationships with many writers and other prominent Canadians, and was well-liked by all different kinds of people, Wilson-Smith said. “He would tell one story about going out and having drinks with Rene Lévesque, because Lévesque did his memoirs in English for McClelland & Stewart, and on the other hand he was a very good friend of Pierre Trudeau.”

Wilson-Smith says one of Bennett’s proudest moments was when Alice Munro asked him to be part of the group who accepted her Nobel Prize for Literature in 2013. (Munro was too ill to attend.) “Authors have different publishers,” he said. “Sometimes that can be a very contentious relationship. Not in this case. He was one of the first people that she thought of.”

Bennett was also known for his philanthropy, donating money to cultural institutions like the National Ballet of Canada and the Art Gallery of Ontario, to the United Way of Greater Toronto, and to scholarships for Indigenous students.

In 2003, three years after Bennett donated three quarters of McClelland & Stewart to the University of Toronto, he was named a Companion of the Order of Canada, the highest level offered. His citation calls him “one of the great altruists of our time,” noting his support for Canadian culture.

“His donation of shares of his publishing house, McClelland and Stewart Ltd., to the University of Toronto was a bold and unprecedented act of largesse,” the citation read. (Random House bought the shares from the university in 2012.)

Bennett also donated the electronic version of The Canadian Encyclopedia to the Historica Foundation of Toronto, which Wilson-Smith says helped make it more accessible to Canadians.

The cause and day of death were not immediately released. Wilson-Smith said Bennett had been increasingly frail in the last year and a half, but that he was “in good form” last week.