A Brantford, Ont. teacher says his class was caught up in unsympathetic bureaucracy after a mix-up at the post office nearly led to a goodwill package not being sent to African children in need.

Tom Zelazny teaches grades 5 and 6 at Woodman-Cainsville school in Brantford.

This year his students have been learning about good deeds.

“We’ve been doing a lot of charity work this year,” he said. “We’re involved in a soup kitchen with a local church. We do that once a month…we did a food drive at the beginning of the year.”

The class recently decided to send a package to children in South Sudan, a country ripped apart by ethnic violence and famine.

His Room 9 class saved their pocket money for about two months to fill the package with items such as pens and notebooks, flip-flops, toys and a soccer ball complete with air pump and a class photo of themselves, Zelazny said.

“Some of these kids are searching through couch cushions, saving their allowance, to get this money,” he said.

The delivery plan was to mail the package to Nairobi, Kenya where it would be picked up and flown to South Sudan, with the help of a Canadian pilot who works for a charity in the region.

The students orchestrated the whole process themselves, said Zelazny.

Earlier this week, he and a group of students took the package to a local pharmacy hosting a Canada Post depot, where they paid $152 to have it shipped.

“It was all up to the kids, so I had one of my students fill out the declaration form,” he said. “I didn’t notice it, neither did the postal clerk, but she had the ‘to’ and the ‘from’ [address] reversed. It’s an honest mistake, we’re talking about an inch difference on the slip there.”

As a result, he says, the package was actually mailed to themselves and showed up a few days later.

‘What do I say to these kids?’

According to Zelazny, he then spoke to the clerk at the pharmacy, who called Canada Post’s help line to have the matter resolved.

“What came back was, it is all on the shipper. The responsibility falls on the shipper, and there’s nothing that they can do,” he said. 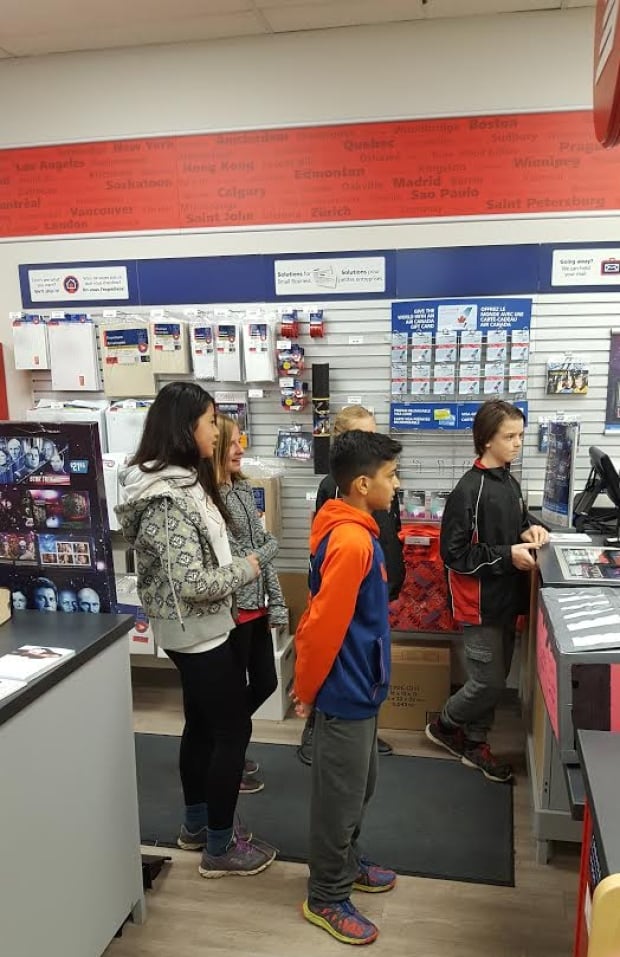 Zelazny said the clerk also called a Canada Post customer service agent, who said the case would go to a claims department and would be “a few” business days, before he would receive a response. And no guarantee they’d get their money back.

“They accepted $152 [international shipping cost] for a parcel that was supposed to go across the ocean, not across the street,” he said. “What do I say to these kids? Because there was a series of mistakes, no one wants to look at the human side of this endeavour we’re trying to undertake here and help us out?”

Package now on the way to Kenya

According to Zelazny, it was the pharmacy owners who eventually paid to re-ship the parcel.

“It’s a family-owned business, and they stepped right up to the plate and they said no matter what happens with Canada Post, we are going to cover your expenses,” he said. “I still haven’t heard anything from Canada Post.”