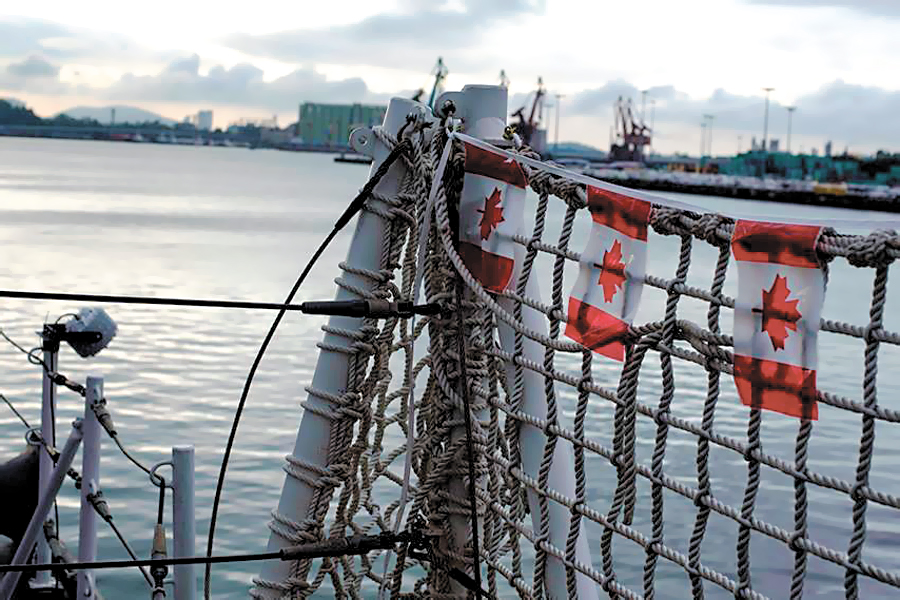 It was business as usual in the port of Incheon, South Korea, on Canada Day.

The air was filled with the noise of a busy port as ships unloaded cargo in the humid air. For HMCS Ottawa, July 1 was far from a typical Saturday; it was Canada’s 150th birthday and together with HMCS Winnipeg, the ships’ crew would be the first Canadians to celebrate this milestone.

On that hazy morning, the ship’s company assembled on the flight deck in tropical white uniforms, joined by Vice-Admiral Lloyd, Commander of the Royal Canadian Navy. As the pipe from the boatswains call cut through the morning air, Ottawa’s crew stood at attention as the flag was raised, marking the first Canadian ‘territory’ to celebrate Canada 150 12 hours ahead of the rest of Canada.

“It was a real privilege to take part in the colours ceremony, to be the first Canadians to celebrate Canada Day,” said Leading Seaman Peer, a Medical Technician.

Celebrating Canada Day on the other side of the world was just one highlight of an eventful port visit to Incheon from June 26 to July 2. After partnering with Republic of Korea Navy (ROKN) for naval exercises, Ottawa continued to foster understanding between the two navies by touring ROKN host ship, Cheon Ji.

The Canadian warship returned the favour by hosting ROKN sailors onboard; tours reinforced the relationship between the Royal Canadian Navy and the ROKN as sailors noted the many similarities between the two navies.

On June 29, Ottawa crewmembers joined sailors from the ROKN for a friendly soccer match at the Incheon Naval Base. Differences in culture and language were set aside for the mutual love of sport. The two teams played hard in the hot afternoon with the ROKN eventually taking home the victory. The night ended with a concert onboard Ottawa featuring Canadian artists Cease and Desist, Hayley Mclean, and Mike MacDonald.

“It was an amazing concert and a chance to relax after four months away from home,” said Master Corporal Jacklin, a Meteorological Technician. “It was great to feel the support of Canadians back home while we are here in South Korea.”

While in Incheon, 18 members from Ottawa visited the Demilitarized Zone (DMZ); the DMZ was established in 1953 and separates North and South Korea. Sailors met with officials for a brief introduction to the history of the DMZ and then stopped at Freedom House, located only a few feet from the border between North and South Korea.

Master Seaman Marier, a Naval Combat Information Operator, described walking up to DMZ. “The North Koreans didn’t talk to us and we were reminded by our hosts that they rarely acknowledge anyone. Official meetings are extremely rare. We got a quick tour of an observation point where we could see several miles into North Korea; we then visited the ‘bridge of no return’ where repatriations used to take place.”

The highlight of Ottawa’s visit was celebrating Canada 150 in Korea. After being away from Canada for five months, many of the ship’s company thought of home, family and friends who would be celebrating later in the day.

“I talked to my mom and sister, as well as my niece and nephew back in Alliston, Ontario, wishing them a happy Canada Day,” said Petty Officer Second Class Ireland, Chief Quartermaster. “They are so proud of me for serving, even though it means being away from Canada on this special day. Despite being away from home today, it is a privilege to be able to share Canada’s origins and culture with other countries.”

Following the early morning colours ceremony, the ship hosted an evening reception attended by the Canadian Ambassador to South Korea, Eric Walsh, Commodore J.B. Zwick, Commander Canadian Fleet Pacific, and ambassadors and chargé d’affaires from 35 other countries. The cultural diversity and friendliness on the quarter deck was a microcosm of Canada itself.

Canada finds strength in diversity and Ottawa’s Canada 150 celebrations, an ocean away from Canada, highlighted Canada’s unique values and commitment to building relationships to help maintain peace and stability in the Indo-Asia-Pacific region.