At first it was easy to discount U.S. President Donald Trump’s outrageous comments on trade. They came in the same breath as vows to build a wall along the entire U.S.-Mexico border and remarks about dating his own daughter.

But now with the planned imposition of duties of up to 24 per cent on Canadian lumber, Trump has demonstrated to the world that he is not merely raving.

There are growing signs that the world is taking Trump’s protectionism seriously.

Canada’s government has responded diplomatically, politely disagreeing with the discredited old saw that Canada is dumping softwood on U.S. markets. But British Columbia, whose huge forest industry would be devastated by such a duty, has shot back, demanding a ban on U.S. thermal coal shipments through the province.

Heaping blame on foreign governments may play well among core Trump supporters. But Trump’s outspoken comments are beginning to alienate some of the country’s closest trade partners in a way that will only hurt the U.S. economy and damage the lives of the people who voted for him.

Congrats to Mexico on getting Canada to pay for the wall. https://t.co/ObscVHW0uy

As in the past, companies that produce lumber in the U.S. will experience a windfall once the duty is imposed. But it is U.S. consumers who will pay the bill, says Queen’s University trade expert Warren Mabee. 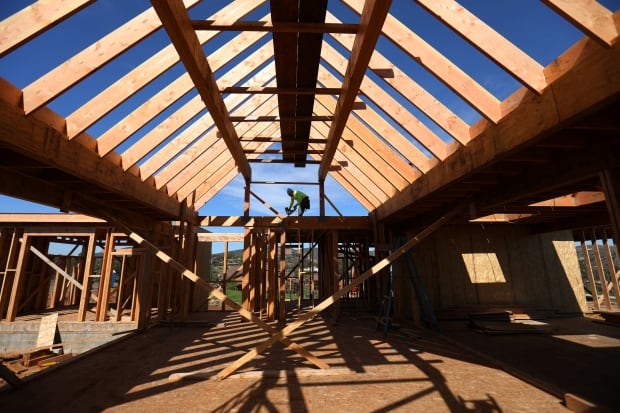 While U.S. lumber producers will get a windfall from duties that devastate parts of the Canadian industry, U.S. consumers will pay the bill as house prices rise by thousands of dollars. (Mike Blake/Reuters)

As for dairy, Mabee says that from Trump’s tweets you would never guess Canada is a net importer of dairy products from the U.S.

But of course Canada isn’t alone in taking offence from the U.S. president’s protectionist tack on trade.

Back when the new president took office, one of his first official acts was to sign an order pulling the U.S. out of the Trans-Pacific Partnership, calling the move “great news for American workers.”

Everyone assumed that was the end of the deal, but Japan’s minister of finance Taro Aso has just announced his country will restart negotiations, leaving the U.S. out in the cold.

“We will start talks on an 11-member TPP, minus the U.S.,” said Aso in New York last week.

Japan isn’t the only one looking to start a club without inviting the U.S. China is already threatening to fill the role of Pacific trade leader with RCEP, the Regional Comprehensive Economic Partnership, a free-trade deal with 16 Asian countries. 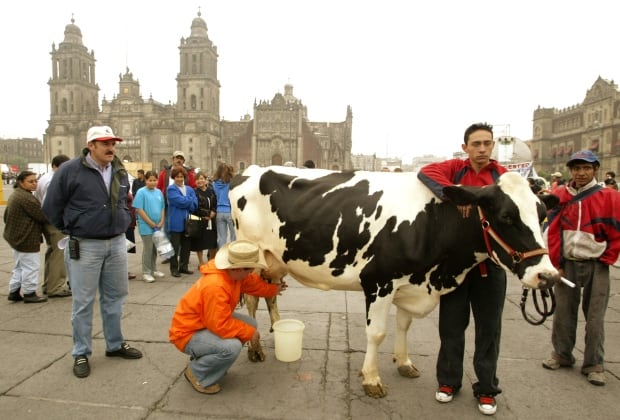 Mexican dairy farmers have complained about cheap imports that hurt their industry, but now the world’s biggest importer of U.S. milk is looking for new sources. (Daniel Aguilar/Reuters)

According to a report yesterday from the Bloomberg business news service titled “America’s $1.2 Billion Mexico Milk Trade Is Now at Risk,” the world’s biggest buyer of U.S. milk is looking for new sources, working on a deal with giant milk producer New Zealand and increasing imports from Europe.

“Mexico is looking to make sure they have market alternatives because of the rhetoric from the U.S. on renegotiating NAFTA,” a U.S. agriculture and trade expert told Bloomberg.

Seeking markets outside the U.S.

Here in Canada trade hostility from the U.S. has led to a push to find new markets for lumber and other Canadian products. Canada’s CETA agreement with Europe is one success, as Canada expands trade links with the world’s second largest trade bloc. A similar deal between Europe and the U.S. seems far away. 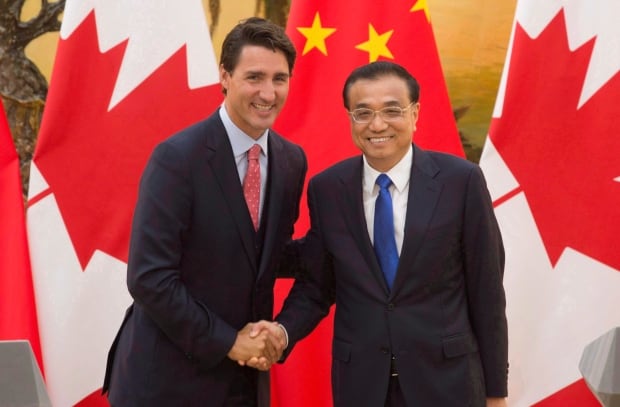 Chinese Premier Li Keqiang shakes hands with Prime Minister Justin Trudeau in Beijing on Aug. 31, 2016. In the face of U.S. protectionism, Canada is looking for new markets for its lumber. (Adrian Wyld/Associated Press)

Canadian international trade analyst Patrick Leblond says off-the-cuff comments by Trump have an effect, not just on government negotiators but consumers. For example, Trump’s grouping energy with milk and timber as areas where Canada is trying to “take advantage” added new enemies.

“It has negative consequences,” says Leblond, senior fellow with the Centre for International Governance and Innovation and a professor at the University of Ottawa. “It puts a damper on how people see the U.S. and how they see U.S. products.”

He says the impact has already become apparent in the U.S. tourism industry as international travellers look for alternatives to Trump’s United States, where minorities feel unwelcome and border guards demand cellphone passwords.

As Trump talks about “America First,” consumers might be increasingly tempted to pursue a strategy of “America Last.”

Patricia Cormack, an expert in a subject called consumer nationalism and co-author of the book Desiring Canada, says consumers have enormous power.

“The idea of boycotting Trump precedes these trade discussions at a more personal level, as all of us are consumers,” says Cormack. “We don’t need California wine. We’ve got tons of choices.”

Of course in a globalized world market, products that seem to be from one country, such as California wine, may have inputs from many other countries, including the country doing such boycotting.

Trump’s inflammatory and misinformed comments might be useful in softening up the other side in a real estate deal. But if they inspire old friends to develop plans for retaliation against the United States, they could be setting the stage for a trade war that will benefit no one.